In the year 2000, three friends and gamers decided against spending a fortune on adapting their standard PCs, choosing instead to assemble their own from components sourced abroad. This quickly became known among their acquaintances and relatives, which led to the three friends receiving more orders for so-called ‘built-to-order’ PCs. As a result, they decided to go into production and a business idea was born. This would eventually become Digitec Galaxus AG.

In April 2001, the trio built their first online shop. From that point on, the business centred not only on PCs, but also components, accessories and (shortly after) consumer electronics. From the outset, efficient processes and working procedures played an important role for the founders, who were all under the age of 25 at the time.

Their intention for the online shop was to permanently offer a wide range of products, at reasonable prices, through a seamless shopping experience. The company’s rapid growth brought about a series of moves and expansions, that sustained business for the 18-year success story.

In addition to online retail, Digitec Galaxus operates ten Digitec branches in the German and French-speaking regions of Switzerland. These also act as pick-up points for online orders, which have proved to be very popular with customers.

“Around one in three orders are collected from one of our branches,” says COO of Digitec Galaxus Johannes Cramer. “In addition, online orders can be received at the Migros Group’s PickMuP collection points.”

Optimal customer experience is a key focus for Digitec Galaxus, who have grown to become Switzerland’s largest online retailer. This starts in the online shopping environment and continues with friendly customer support.

Reliable, fault-free and attractively packaged deliveries are a top priority. As a result, the distribution centre (DC) is an important building block for customer satisfaction. Around 300 employees are now responsible for the fast and punctual despatch of shipments from the company’s central warehouse.

Based in Wohlen in the Swiss canton of Aargau, Digitec Galaxus’ central warehouse covers an area of 46,500 m2, fulfilling online shopping orders, as well as branch and pick-up point deliveries. This is almost equivalent to the size of seven World Cup standard football pitches. Over 100 kilometres of shelf length accommodates up to 1.5 million items. This is more than twice as many items than the company could previously process when it operated a purely manual warehouse.

Streamlined processes, maximum flexibility and the optimum use of space in the DC, were all critical benchmarks for the intralogistics concept. The pick tower, creating an automatic small parts warehouse (ASW) for medium-sized items, and the goods-to-person order picking and consolidation, formed core aspects of this automation project.

The ASW for medium-sized items was realised in a new building, which is over 5,000 m2, 18 metres high and has 11 aisles. This warehouse also assumes a consolidation function for items already picked in the pick tower. There is space for approximately 44,000 containers of small parts, each measuring 600 x 800mm in single deep storage, and/or containers measuring 600 x 400mm in double deep storage. 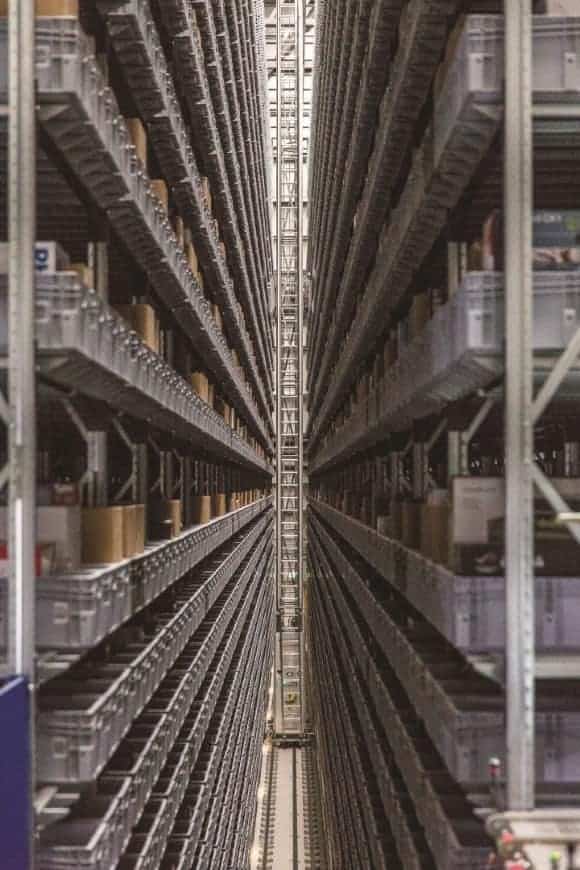 The 18-metre high QUICKSTORE 3.2 shelf retrieval machines are each equipped with two BARRACUDA lifting devices to ensure maximum throughput. The automated warehouse can be further expanded to a total of 16 aisles at a later stage.

The ASW supplies the eight goods-to-person workstations with medium-sized items from Digitec Galaxus’ range. High employee productivity, faultless picking and ergonomics underpinned the design of the operator spaces. The workstations are able to handle both the large trays and the containers with the mini items. This means that all articles in a customer or branch order can be combined at one workstation. 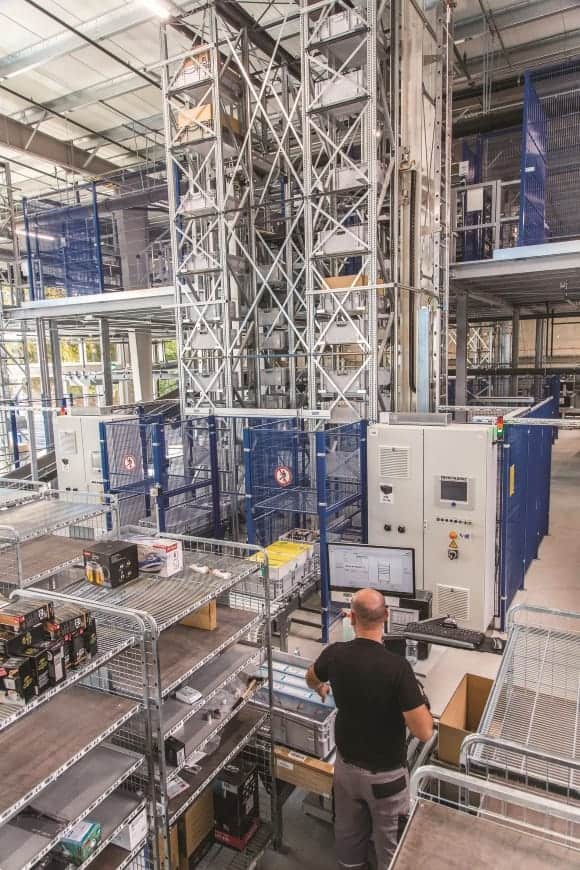 An existing hall was converted into a three-story pick tower using a wooden stage construction. Design measures allow all levels of the pick tower to receive daylight, and the wooden construction ensures a friendly and quiet working atmosphere. In the pick tower, employees mainly locate small items such as wristwatches, IT accessories or t-shirts from the shelves.

The picked containers are placed on the conveyor, where they either move straight to a colleague in the packaging department or in to the consolidation buffer. From the buffer, they are moved together with other picked containers to one of the goods-to-person workstations.

In 2015, Digitec Galaxus sought a reliable partner who could advise them on the necessary expansion and automation of its warehouse. It required a tailor-made solution to be developed and implemented across its operational processes. The company’s rapid growth had brought the existing purely manual warehouse to its capacity and performance limit. As such, further growth was no longer possible.

“Due to the convincing concept and its great experience in logistics solutions for online and omni-channel trading, we chose Vanderlande as the general contractor for our warehouse automation project,” says Johannes.

In addition to the conveyor and warehouse technology, Vanderlande also integrated a warehouse management system (WMS). Thanks to excellent cooperation, the project, including the construction of the new buildings, was completed within 18 months and became operational in September 2017.

The construction of the new buildings aligned with the intralogistics project, and required a high degree of collaboration given the particularly challenging requirements. However, everything was ready in Wohlen for the system’s first big test during the 2017 Christmas period, where Digitec Galaxus achieved record sales.